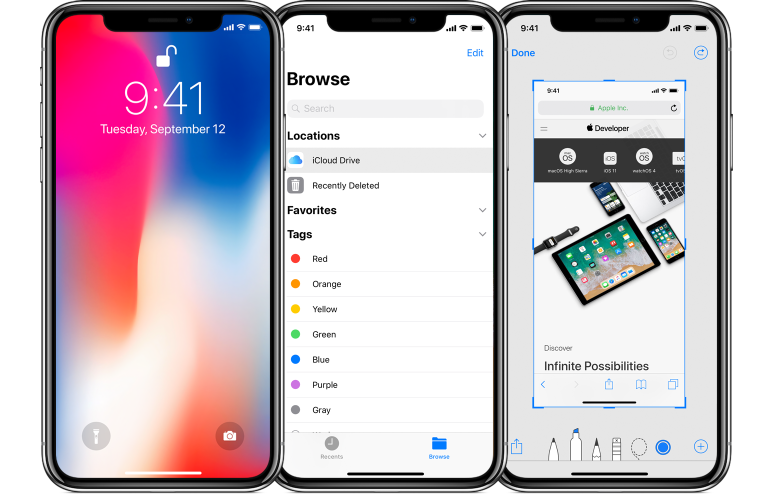 When iOS 11 came out ahead of iPhone X and iPhone 8 / 8 Plus being launched in September 2017, it was an exciting time. The beta versions showed some fantastic features never seen on iOS before; productivity features that aligned iOS to the needs of business users; unique tweaks that made iOS 11 the most powerful version of Apple’s mobile operating system ever. But when you think about it, a lot of the features we think of as revolutionary on iOS 11 are things that are already available outside the Apple ecosystem… including productivity, AI, augmented reality and almost everything else.

Split screen view, also referred to as multi-window support, came to Android 7.0 Nougat. The feature was an amazing boost for productivity, and gave Android a significant edge over iOS in that respect. A year later that feature came to iOS 11. But there’s another important feature that came with split view that Apple was late on.

Along with split view came an important productivity feature: drag and drop. Though it’s been on desktop environments for as long as we can remember, Nougat brought it to the Android ecosystem in 2016. Apple brought it to iOS 11 last year, making this another feature that Apple could have probably brought in with iOS 10.

“Hey Siri, give me the news” should have been something that came long ago considering how long Apple has been sitting on the digital assistant. Again, that only came with iOS 11, in which Siri got some serious upgrades. In this instance, Amazon beat Apple to the punch with “Hey Alexa, what’s the news?”

Third-party QR code reader apps often suck, and Apple users have been forced to deal with them despite owning devices worth hundreds of dollars. With iOS 11 came an update that made QR scanning native using the default camera app. QR codes were invented way back in 1994, but they’ve become very popular since then. Apple should have foreseen this and brought this ability on the camera app within the first few iOS versions, at worst.

Apple’s revenues are heavily dependent on two things: People upgrading their iPhones every year or two, and people buying an iPhone or Apple product for the first time. Although first-time buyers need to go through a period of getting used to as far as the iOS interface goes, the seamless experience and superior UI/UX usually converts people into lifelong Apple fans. Unfortunately, the same can’t be said of people who upgrade their iPhones and struggle to move their data, constantly being afraid that they’ll lose valuable files and data during the move. Automatic Setup is yet another feature that Apple should have brought in a long time ago considering the importance of upgrades as core to their revenue growth.

There are several other features where Android got the jump on Apple by at least a year or more, which is why the App Store is full of iOS tools to fill all those gaps Apple has left over the years. With iOS 11, Apple is finally recognizing the need to understand what its users want rather than shoving their own premises down their throats. It’s a small move, but significant nonetheless.

How to Enter and Exit DFU Mode in iPhone XS, iPhone XS Max and iPhone XR