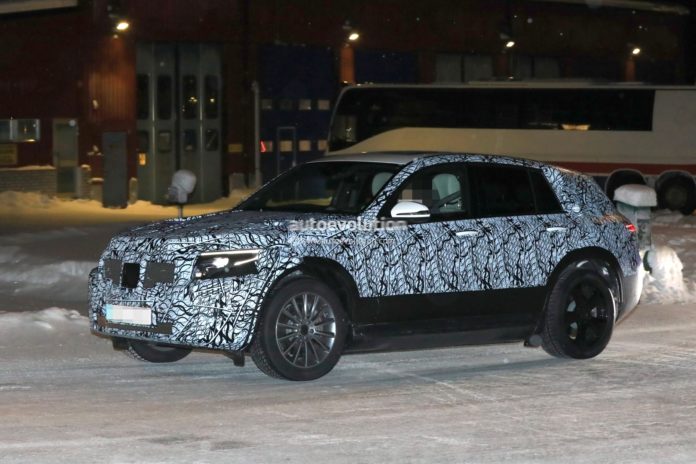 Daimler has one of the most ambitious EV timelines of all automakers. Its German peer company, Volkswagen, has a 2030 timeline to electrify its entire fleet, but they have 300 different models under various name plates. Daimler, of course, doesn’t have that many, which is why their 2022 timeline for offering an electric version of all their vehicles is actually achievable.

The Mercedes-Benz EQC that everyone was talking about early this year is finally coming next week, and the teaser-mobile is on top gear as we approach the September 4 unveiling.

Here’s a very short teaser of the EQC’s interior:

And another one showing the EQC being tested in the Black Forest by Formula 1 test driver and racing driver Susie Wolf:

The specs are fairly reasonable for a first-time EV attempt by the German carmaker, but really nothing to write home about. “Under optimistic driving conditions” the range is about 310 miles. More realistically we expect about 250 miles, which was the original EPA estimate for the 70 kWh battery.

The car itself is a heavy-weight. Literally, with 5000 pounds of steel, glass, leather, rubber, plastic composites and battery.

Side note: Audi and Benz are both using the SUV car-styling format presumably because that’s the only form factor you can hide a really big battery into. They don’t have the battery tech (yet) that Tesla and Panasonic do, so their batteries are most likely much less dense than the 2170 cells used in Tesla Model 3.

Of course, what Mercedes-Benz lacks in EV technology will be made up for by the plush interior, superior connected technology and extra features that you probably won’t find in their standard ICE models. There’s a lot more space in an electric car, so we expect that Benz will maximize cargo room as well.

The funny thing is that Elon Musk foresaw what his competitors would do long before they became his competitors. They were initially the enemy, but now they’re all scrambling to meet their own forced EV agendas. Meanwhile, Tesla has been working to stay ahead of the game with Autopilot, superior safety features, the best all-round visibility, great design, ample cargo and ‘frunk’ space and the sheer pleasure of hitting instant torque when you floor the accelerator.

VW, Daimler and BMW all have to play catchup even though they have much greater resources than Tesla ever had. But, again, despite having such resources, they’re moving very carefully because they have brand names to protect. Sports car specialists like Porsche know this only too well.

Maybe that’s what we should call the German trio: The European EV Scramblers. Comments?

The EQC is expected to be unveiled in all its glory – including full specs – on September 4. Less than a week to go. Keep your eyes peeled and your ears perked as we bring you the scoop.