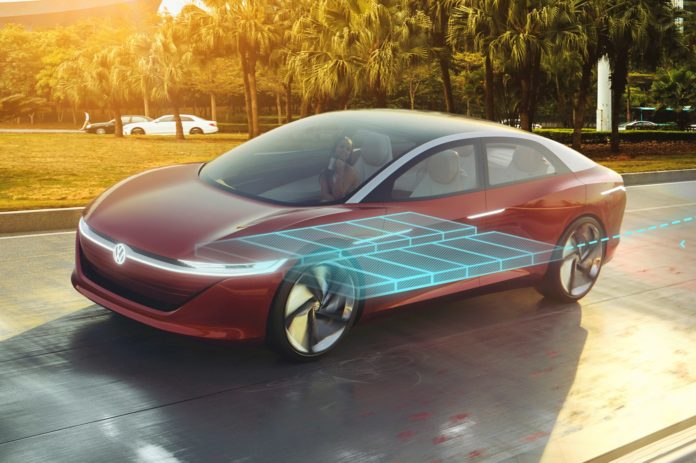 Which Battery Type Is Used in an Electric Car?

General Motors introduced the EV1 in 1996 as the world’s first mass-produced electric vehicle. The two-seat coupe, which was built from the ground up as an electric vehicle, had a range of 78 miles, accelerated to 50 mph in 6.3 seconds, and required more than 5 hours to fully charge. It was powered by a lead-acid battery.

While the EV1 was being phased out, Tesla Motors joined the automotive industry with the Tesla Roadster, the world’s first mass-market battery-electric vehicle to use lithium-ion batteries. The rest, as they say, is history.

How Do Lithium-Ion Batteries Work?

Lithium-ion batteries have established themselves as the industry standard for powering a wide variety of devices, ranging from consumer electronics such as cellphones and laptops to mobility and transportation such as bicycles and automobiles.

Unlike traditional lead-acid and nickel-metal hydride batteries, lithium-ion batteries use a liquid electrolyte to regulate the energy transfer between the cathode and anode. The advantages of lithium-ion batteries include increased battery life, improved performance in extreme temperatures, recyclable components, and a higher energy density. The energy density of a battery refers to the amount of energy it can store per unit weight. Simply put, the greater the density, the greater the output power.

Despite their numerous advantages, lithium-ion batteries have several disadvantages. Although lighter than prior battery technologies, lithium-ion batteries are nevertheless rather hefty due to their liquid interiors. Additionally, they function better when packaged in stackable packets, which adds additional weight. Moreover, the electrolytes are flammable, can become unstable in severe temperatures, and can result in explosions or fires if damaged or charged improperly. There is no shortage of news accounts ranging from cellphone malfunctions to airplanes catching fire as a result of battery problems.

How Does a Solid-State Battery Work?

Solid-state batteries are more stable and compact by default because they do not contain a sloshing, flammable liquid electrolyte. The solid electrolyte can be made of a variety of common materials, such as ceramics or glass.

When Are Solid-State Batteries Going To Be Used in Electric Vehicles?

Despite its numerous advantages, expanding production up to the level required for use in EVs remains an expensive operation. Remember, solid-state batteries are well-known for their use in smartwatches and heart rate regulators.

The development expenses and production problems associated with creating solid-state batteries for mass-market EVs are significant disadvantages. However, just as lithium-ion batteries have become more economical, the hope is that solid-state batteries will follow suit. And automakers are investing heavily in the technology, particularly with the proposed zero-emission brand strategy and EV-only lineups.

BMW and Ford have invested $130 million in Solid Power, a solid-state battery firm based in Colorado. Hyundai is investing $100 million in SolidEnergy Systems, a spin-off from the Massachusetts Institute of Technology. In collaboration with Panasonic, Toyota announced the premiere of a prototype SUV powered by solid-state batteries this year. Additionally, General Motors and Volkswagen are investing.

Audi, Bentley, Dodge, Jaguar, Jeep, Land Rover, Lotus, Mazda, MINI, Nissan, and Volvo have all announced their electrification intentions and zero-emissions goal dates. Some have even gone so far as to declare that gasoline and diesel engines would be phased out of their lineups by 2050.

However, EVs must be profitable for automakers, inexpensive for customers, and capable of completely replacing vehicles equipped with an internal combustion engine (ICE) pound for pound. Even though there are more electric vehicle options than ever before, gasoline-powered vehicles continue to dominate the market. After all, fossil fuels are still inexpensive, vehicle options are many, and refueling takes only a few minutes.

Nonetheless, the appeal of solid-state batteries is self-evident, and their potential may compel manufacturers to maintain their manufacturing commitments. Electric vehicles are already on par with or outperforming their internal combustion engine equivalents in terms of design. One needs to eliminate range anxiety, maintain price parity, and offer compelling performance, then perhaps people will truly embrace an all-EV future.