As a technology-based retail company, IT infrastructure could have easily become one of Amazon’s (NASDAQ:AMZN) biggest cost items, but Amazon deftly worked around it and converted a cost center to a profit-making business that is growing at such a speed that it is already making its presence felt in the company’s bottom line. 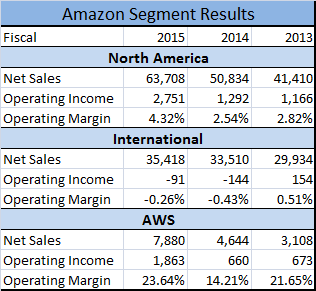 Amazon Web Services is the most profitable segment for the company, having brought in $1.86 billion in operating profits in 2015 at an eye-popping double-digit margin.

To put that in perspective, Amazon’s North America segment earned nearly eight times that for an additional operating profit of only $1 billion – a total of $2.75 billion.