Nobody really knows who invented membership/loyalty programs. Perhaps the Romans mainstreamed the idea with their welfare programs targeting the poor, but it is the airlines industry of our times that took it to the next level with their loyalty programs that are geared to benefit frequent fliers.

But the benefits of a membership program are simple enough. For the user, you either get extra services or get to keep reducing your overall expenses. For the company, the higher the number of transactions or amount per transaction per user, the better its own results overall.

It is sort of a win-win situation that can truly benefit both the company as well as the client. But things are rarely ever so simple, are they? If that were the case every single company in the world would have a membership program and all of them would be doing exceedingly well. Unfortunately, while many of them do, only a few truly stand out.

In the world of retail, there is no other membership program better than Costco’s. Costco has more than 80 million members worldwide to prove it, and more than 90% of its members keep renewing their membership every year. It’s a huge testimony to the value that membership holds for Costco’s customers.

But another membership program is now making waves like nothing before it ever could, including Costco’s loyalty program.

Amazon Prime exploded into the scene in 2005 with a simple free two-day shipping offer for a flat annual fee of $79. At the time it was like any other loyalty program, but very soon Amazon started piling up the benefits, gradually adding more and more – deals as well as members. Today Amazon Prime is one of the biggest membership programs in the world offering so many freebies and benefits that we’re losing count. Well, almost. Here’s a recent post where we covered the main offers for Prime members.

Did You Know Amazon Prime Was This Big?

Suffice it to say that Amazon’s Prime membership program has steadily expanded its utility, and the cost benefit it offers for its customers. The world’s largest international retailer does not break out its total membership numbers, nor does does it let the world know how much money it makes or loses through the program. But there are several companies that keep using an ultra-wide lens to estimate the program’s effectiveness. 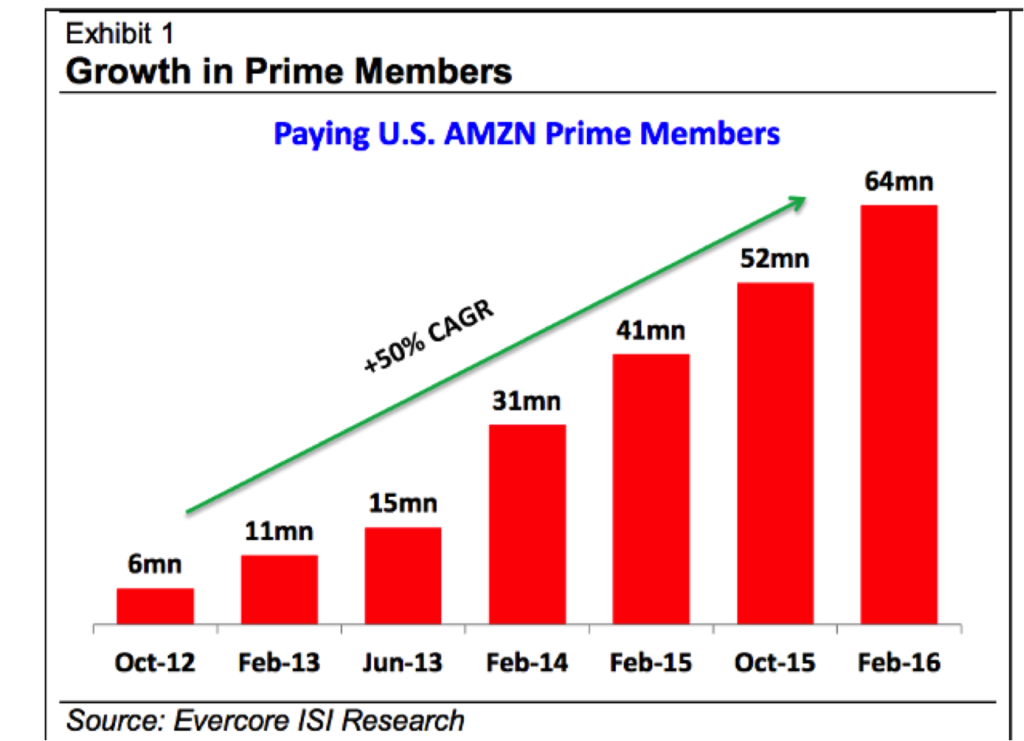 We don’t really know how accurate Evercore’s numbers are, but we do know that the population of the United States is nearing 300 million, and the total number of households currently stand at around 125 million. Since Amazon Prime memberships can be shared between two adults in a household, if Evercore numbers are correct Amazon might be closing in on 50% of the households in the United States. That’s something very few companies can boast of.

The $99 per year or $10.99 monthly Prime membership, as you saw in the other article, is not just limited to free shipping. That list keeps getting bigger and better, and Amazon keeps adding multiple offers on top of what they already have. Their openly stated goal is to make Prime memberships so value-heavy that “you’d be irresponsible not to be a member.”

And it’s working. You know how we know? Look at this spend comparison between Prime members and non-Prime shoppers on Amazon.com: 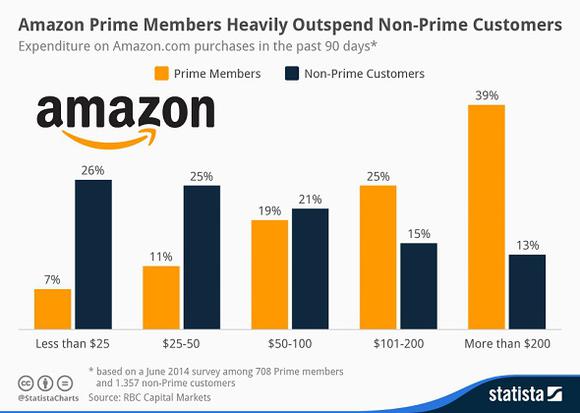 But with so many benefits on offer for just $99 a year, how does Amazon gain? The answer is simple: Amazon wants to fill their members’ lives with value so they don’t think of going anywhere else. After all, it is a loyalty program, and that’s what Amazon is trying to achieve. Did you know that the average American household is part of no less than 14 loyalty programs, of which only 6 are actively used. Amazon wants to top that list of six, and that’s all there is to it.

Think about that for a minute. Amazon can already hook you up to nearly any product you want to buy from tomatoes to tablets and Smarties to Smart TVs. They’ve got Prime Music and Prime Video, they’ve got books covered obviously, and they’re adding products at a manic pace. Just take a look at this report from Export-X.com:

“Today Amazon sells over 480 million products in the USA. Amazon’s product selection has expanded by 235 million in the past 16 months. That an extraordinary average of 485 thousand new products per day.

Amazon’s catalogue is grouped into dozens of departments. There are over 30 million items in the combined Clothing, Shoes & Jewelry department, 24 million in Sports & Outdoors, and 60 million in Home & Kitchen. There are 6.7 million Office Products items, 96 million in Electronics, 1.7 million in the Beauty department, 1.2 million Baby products, and 900 thousand Grocery items.”

Did you get that? 485,000 new products per day! That’s how fast they’re growing their business. And when their retail model is that aggressive, why wouldn’t their loyalty program be?

Amazon wants you to go on Amazon.wherever for everything you need, and no where else. And what it doesn’t sell on its own, it offers through its Marketplace section. You can now shop for cars on Amazon.com, although you’ll ultimately be talking to a dealer when you buy. In fact, a while ago Amazon tied up with car maker Hyundai to offer test drive appointment bookings on the site. Just book your test drive and the new Elantra 2016 will drive right up to your doorstep.

It should be amply clear by now that Amazon sells just one item. But that item is worth countless billions of dollars. It’s called CONVENIENCE, and it is priceless. That’s what Amazon is really selling. And Amazon Prime is the icing on the cake of convenience, as it were.