There’s been much speculation about a Surface AIO (All-in-One) PC code named Surface Cardinal that’s supposed to come out at Microsoft’s hardware event this month, and recent regulatory filings from Microsoft show that this may well be true.

“Recent FCC filings saw two new devices by Microsoft, purported to be the Surface-branded keyboard and mouse. It is speculated that both these devices will accompany a rumored all-in-one PC that Microsoft is set to announce by the end of October. (Federal Communications Commission)”

The “Surface Ergonomic Keyboard”, as Microsoft called it at a filing last week with the Bluetooth Special Interest Group, is expected to accompany a Surface-branded mouse.

Both of these peripherals may make their appearance alongside the Cardinal. A patent application from Microsoft shows a possible design draft for what could be released as the Cardinal – shown below. 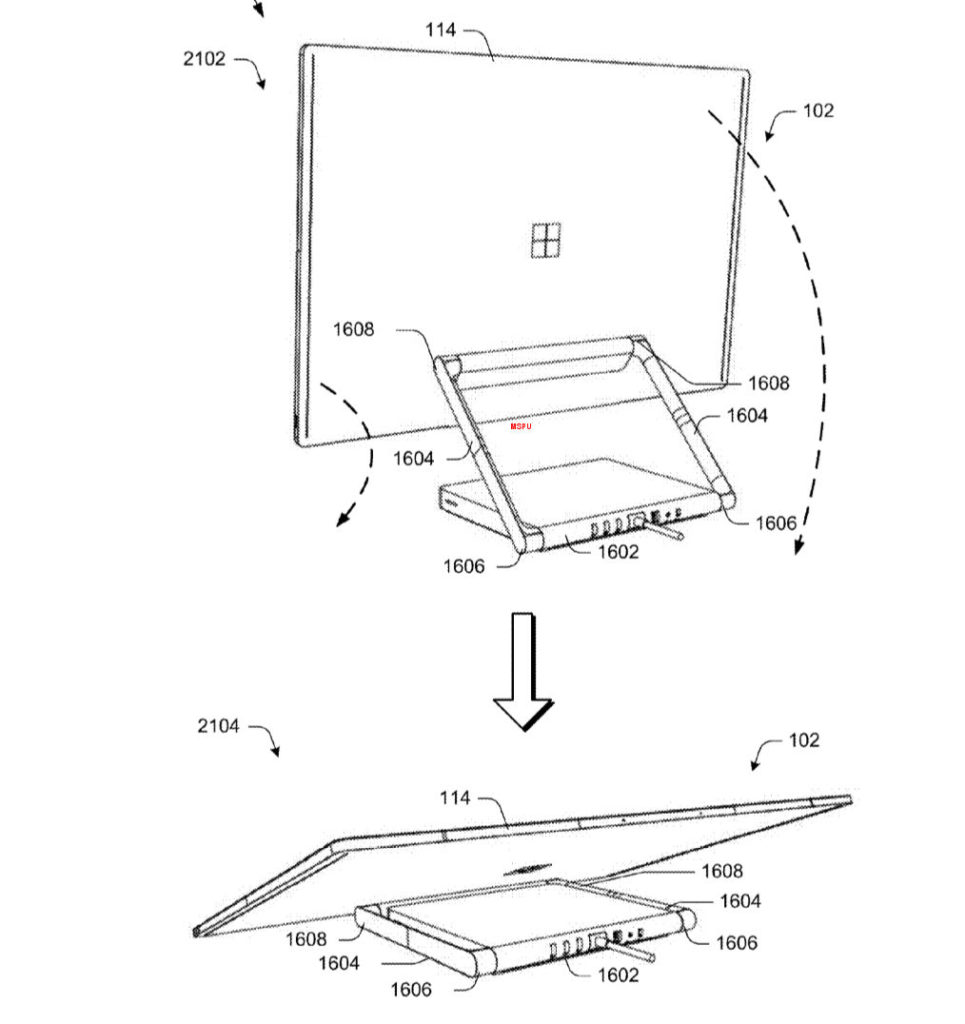 What’s interesting is that the AIO PC from Microsoft could actually be a major step in the direction of modular design. Here’s Microsoft describing the design aspects:

The “stackable components” that Microsoft described in another section of the patent application will make it easy to upgrade the device in many ways – storage, memory, additional sensors, wireless capability and so on. Essentially, that means merely buying modules instead of upgrading the entire product. This is how Microsoft explains it:

“The range and functionality of hardware resources that are made available for use with a computing device is ever increasing. For example, faster processors, memories that support larger storage amounts, wireless communication devices that support increased bandwidth, and so on are being continually developed.  However, conventional techniques that made this increased functionality available to a user generally involved the replacement of a user’s current device with a new device having this functionality.”

So instead of replacing the device, you’ll merely be “stacking” additional components on top of the modules you already have.

It’s a great idea, and not the first time we’ve seen an attempt at modular devices. Remember Google’s Project Ara for modular smartphones? The problem there was not the viability of the idea itself, rather the logistical nightmare of multiple component manufacturers and a splintered Android environment.

“Android might be open source software, but the open portions can’t be used to write a working operating system. The people who make things like the processor or the camera or the memory controller will have some very model-specific software need to make them work. Without these files, your phone just isn’t going to work. A modular phone would not only need software support from Google but from the companies who make each individual part, too. And then those companies will need to be convinced to allow Google to redistribute that software as a downloadable package.

Now multiply that situation by the number of companies who build the parts that fit into one of the six slots on the Ara chassis. Suddenly, unoptimized software that takes a lot of storage space isn’t such a big issue.

We aren’t sure why the project was scrapped, and I’m not saying this was the reason. But this would be a pretty big stumbling block and I don’t think even Google could work around it.”

So, will Microsoft face similar issues with the rumored AIO PC? It’s possible, but the magnitude of the problems Google potentially faced will be highly reduced. For one, Microsoft will be writing all the code that goes into the Windows 10 operating system that will run on the Surface Cardinal. That removes a huge hurdle. Second, they will likely make the stack modules themselves as well, or at least outsource a specific set of requirements. Most of the problems that Google could have faced are dealt with right there with those two advantages.

We don’t know how well modular PCs will sell, but we do know that it makes upgrades much more convenient and a whole lot cheaper. In a weird way, it’s like those action figures where “accessories are sold separately”. Remember those? That’s exactly what it’s going to be like.

It’ll be fun to watch what direction Microsoft eventually takes with this modular design approach on the Surface Cardinal but, unfortunately, no patent filing is ever hard evidence that we’ll actually see the tech in the flesh. We’ll just have to wait for their big event to see what it will reveal.

Until then, we’ll keep reporting and commenting on what we learn so you can keep your finger on the pulse of Microsoft’s Surface family.

Thanks for reading our work! Please Like our page on Facebook, and do bookmark our site for more insightful articles on current and future technologies that are changing our lives.