Nintendo Co. shares tumbled badly after the release of Super Mario Run was greeted with not-so-great reviews. Bad reviews aside, there seems to be a lot of issues around the $9.99 pricing. The game is free for the first three levels but you need to pay $9.99 for the full version after that, much higher than comparable games.

“Super Mario Run was supposed to be a watershed moment for Nintendo, marking its first full foray into the world of mobile gaming. But the title, for now available only on Apple Inc. devices, had nearly 50,000 reviews in the U.S. App Store, with an average rating of two and a half stars out of five “ reported Bloomberg

Fortunately, the company didn’t do all that bad in the first three days after the launch. According to App Annie:

“The game’s first three days (December 15–December 17) generated roughly $14 million in worldwide consumer spend, which translates to over one million paying customers. The total number of downloads during these three days was roughly 37 million, suggesting a conversion rate of about 4% worldwide. While this number may sound unimpressive, it is important to keep in mind that the game’s pre-launch publicity was unprecedented, casting an unusually wide net. This means that all types of users, including those who were extremely unlikely to pay, were targeted.” 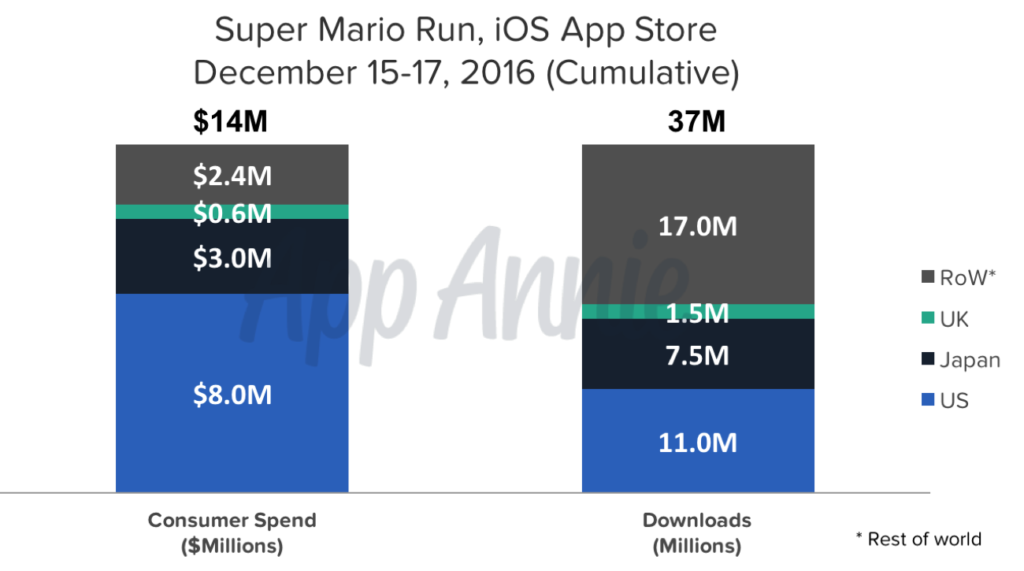 Users in the United States drove a major portion of those sales, spending $8 million and accounting for 55% of the worldwide Super Mario Run consumer spend, while Japanese consumers spent $3 million, followed by UK with $600,000 and $2.4 million coming from the rest of the world.

The initial days of great sales are no indication of how the game will actually perform over time, but let’s just say it’s no Pokemon Go. Perhaps consumers were a little disappointed with the game after so much hype spanning more than three months since the release of iPhone 7 when the game was announced by its creator, Shigeru Miyamoto.

What remains to be seen is how long those earnings can be sustained. With poor ratings and worries about the too-expensive price of unlocking the full game, you could say Mario didn’t get off to a good start at all.

The game is available only on Apple devices and there is huge opportunity waiting for them when things move to Android – if they ever do – but early success in Apple’s ecosystem will play a very important role in that decision. If the game fails to sustain the momentum, it might force Nintendo to adjust its strategy and pricing if and when it decides to open it up to Android devices.