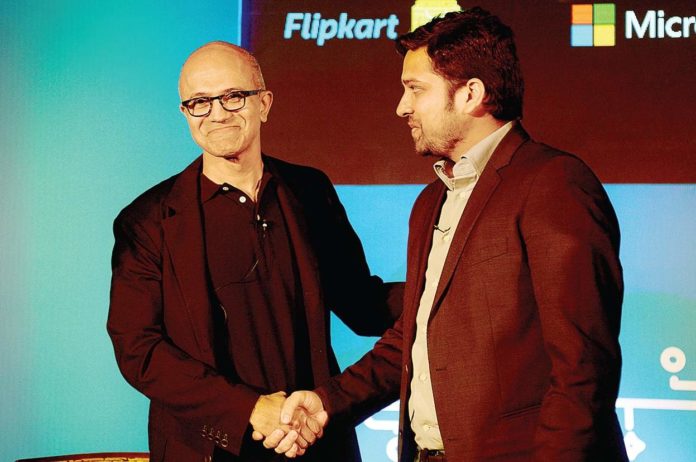 Flipkart, one of India’s leading e-commerce companies, raised $1.4 billion from a recent funding round that took the company’s valuation to $11.6 billion. But the interesting part was that Microsoft was one of the investors.

The investment is not just a huge vote of confidence from Microsoft, but one that signals a partnership that could last for a really long time. Back in February, Microsoft CEO Satya Nadella met with Flipkart Group CEO Binny Bansal, and announced that Flipkart would adopt Microsoft Azure as its exclusive public cloud platform.

Flipkart and Microsoft have a common competitor by the name of Amazon. Maybe you’ve head of that upstart online bookseller.

Flipkart and Amazon are now engaged in a fierce battle to be the number one e-commerce player in India. Though there were multiple players in the market, there are signs that other players are not just able to manage to stay in the fight with Amazon and Flipkart.

India is the sixth largest economy in the world, but the fastest-growing one. There are an estimated 450 million internet users in the country – a penetration level of less than 50% of the population. The potential market for e-commerce is huge and, for e-commerce companies, the infrastructure requirement is equally huge.

By partnering and investing with a company that has a great future, Microsoft has booked a client with massive potential.

And let’s not forget that, as Flipkart keeps growing, it will pay off Microsoft’s investment in Azure infrastructure, and then some. This is possibly one of the lowest-risk investments that Microsoft has ever made, and one that could pay them many, many times over.

Microsoft is not new to investing in companies: they invested $240 million in Facebook in 2007, which has reaped handsome returns as Facebook continues to show strong revenue growth in digital advertising.

The new investment in Flipkart, however, comes close on the heels of Flipkart using Microsoft Azure, one of the most important business units within Microsoft’s forward-looking offerings. As such, it is an astute decision on Microsoft’s part to help grow their India infrastructure presence in tandem with their biggest cloud infrastructure rival, AWS, the cloud wing of Flipkart’s biggest rival in India.