Home Amazon Surface Phone is Not a Smartphone, and It is a Vital Concept... 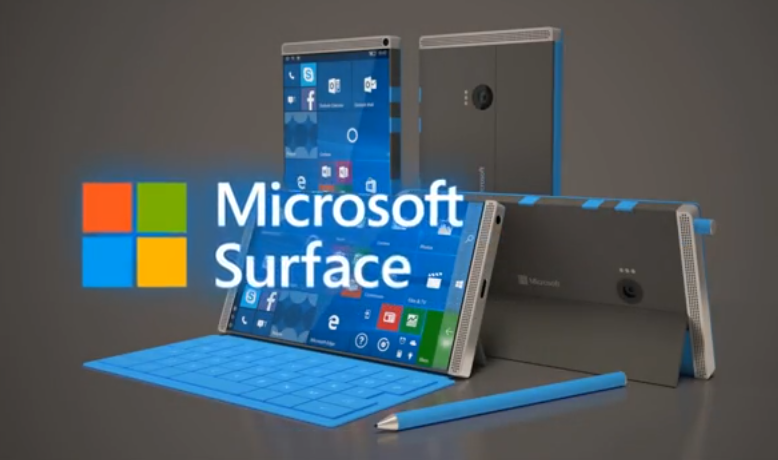 Despite the name that it’s been given, Surface Phone isn’t going to be a phone at all. At least, not if Microsoft is designing what they refer to as a “cellular PC” that will have all the capabilities of a PC in the form factor of a smartphone or phablet. On the surface, it’s a phone, but underneath, it’s a whole lot more.

The whole idea behind Surface Phone is so that Microsoft won’t have to scramble for market share in the unfairly competitive smartphone operating system market, where Android rules and iOS holds fort on the strength of its devices. And that’s about it. Windows, right now, holds a minuscule 0.3 percent marketshare in this fiercely competitive segment that is the mobile OS world.

And that’s why butting their head (once again) against a brick wall that is now fortified with industrial-grade steel in the form of Android and iOS is sheer lunacy.

Which is exactly why Microsoft CEO Satya Nadella won’t be doing that. His approach to everything has been faultlessly methodical, yet creatively devious. That concept will become clearer as you read on.

With Microsoft Azure and Office 365, Nadella put the entire weight of the company behind them, even going so far as to set ‘cloud first’ as the company’s top priority. Nearly all of Microsoft’s software is now available on the cloud. Standalone licenses are still available, but revenues from that segment are clearly dwindling, admirably offset by gains in cloud-based products.

Now, it’s time for the second half of that strategy: the ‘mobile first’ part. And by mobile, Nadella is not talking about mobile phones. He’s referring to mobility in the abstract. And that’s essentially what Surface Phone represents. That is also why it is so many years in the making.

Surface Phone is not a smartphone in any conventional sense except, perhaps, from a physical dimensions perspective – the fact that you will eventually be able to hold it in your hand and put it in your pocket. But that’s as far as the similarity between a Surface Phone and a smartphone or phablet goes. Period.

Cellular PC is a better working name for it, although it’s not such a great name from a branding perspective. People are expecting a smartphone with pizzaz, not a really tiny desktop computer. That messaging will evolve over time, so Microsoft needs to think hard about how it wants to promote the device.

But what’s possibly even more critical than Surface Phone itself is the ecosystem that is being built around it. Without the wholehearted acceptance of open source and app developers – the entire community of applications developers, in fact – any mobile device from Microsoft is doomed to fail. Call it their karma, if you will.

That’s a given. There is no way in heck or hell that Microsoft can succeed without the app ecosystem, the partnerships and the collaborations required for such a significant leap in technology.

And that’s why we’re seeing a new side to Microsoft of late – more openness toward the developer community, whether that’s in the form of opening up Cortana to them to develop new skills for, or becoming a Platinum Member of the Linux Foundation, or any of the activities and moves that the new Microsoft engages in.

All of that activity is aligned to their newly found direction set by Microsoft CEO Satya Nadella. He is the man responsible for Microsoft’s stellar performance on the stock market. And he will also be the one to take the fall if this concept of mobility and ‘mobile first’ fails.

To his credit, he’s already made the ‘cloud first’ part work exceedingly well. A few years ago, very few of the people who had heard of Amazon Web Services had ever come across Microsoft Azure. Today, with the help of Office 365 (we’ll get to that in a bit), Microsoft Azure is one of the preferred public and hybrid cloud infrastructure platforms in the world, alongside AWS and IBM Cloud.

That leads us to the strategy that Nadella has been using to his advantage – the “creatively devious” approach I spoke about earlier. He knew that he could not combat AWS and its significant lead head-on by merely offering a rival cloud infrastructure service. So he went after the SaaS market, using Microsoft’s inherent strength in enterprise productivity and collaboration software.

But in pushing Office 365 aggressively to the clients that Microsoft already had, the company was taking a big risk in the form of potential cannibalization of Microsoft’s core Office standalone software licensing revenues. That gamble paid off big time, and Office 365 is now the most widely used SaaS application in the world. It turns out that it was easier to push Salesforce.com, Box and Google Apps for Work out of the way than it was to push AWS out of the way.

As a result of that indirect attack on the cloud market using Office 365, Azure grew as well, in triple-digit rates, in fact. And it’s still growing at near triple-digit figures, year-over-year. And the ultimate reward is that Microsoft’s cloud-related revenues are now neck and neck with those of Amazon Web Services. Both have crossed the $14 billion a year mark from their respective cloud businesses, and both are on track to hit $20 billion in the next few years.

That same indirect strategy is going to serve Microsoft very well in the mobility business – not by creating a competing smartphone, but by creating a device that will not have an equal rival for a long, long time. Just like Microsoft used Office 365 to go after the cloud market, this time they’re going to go after the mobility market instead of the smartphone market.

And this is where they can excel, because they’ve slowly been getting their app ecosystem in place for such a move. Universal Windows Platform apps are exactly the arsenal they need to power the Surface Phone. And if they can bring in support for thousands of x86 apps in the process, that will be a major win for Microsoft.

Possibly the best part about that is the fact that neither Apple nor Google will have a ready response to that sort of device. It will take them years to develop something similar, and by then, Microsoft will have established a strong and unassailable lead the way AWS has done in the public cloud infrastructure market.

Seen from that angle, there’s no such thing as a “delay” in releasing Surface Phone. The time is simply not yet ripe for such a move.

But when everything falls into place, we’re going to see something truly innovative – another iPhone, in fact, because that device changed the world the way Surface Phone will, eventually.

Major technology cycles come in waves, and it might help to explain the concept pictorially: 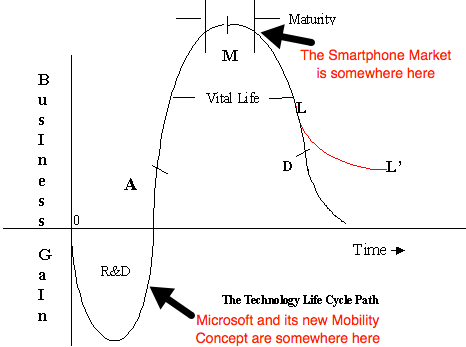 That’s Surface Phone right there, at the bottom, below “see” level, biding its time.

Meanwhile, the smartphone market has reached a measure of maturity, which we’re seeing as a decline in smartphone sales growth around the world. Sales will eventually stabilize, but we’re not going to see any major innovations from here on out – not even from Apple, I dare say.

The next wave belongs to devices like Surface Phone, and that’s why it’s worth the wait. It would have been the same for the original iPhone had we heard about it back in 2002 – five years before it was launched. The only difference is that this time around, there’s a whole lot more internet connectivity to go around, and massive smartphone usage to spread the word about Surface Phone. That’s really the only difference.