As quarterly earnings results roll in, it’s time to do our favorite topic – “who won the cloud computing race?” The three top cloud service providers – Amazon, Microsoft and IBM – continued their double-digit growth runs during this quarter, just like the previous one, but Microsoft may have just nosed ahead of its two key competitors this past quarter on the overall cloud computing revenues front.

But First, What is Commercial Cloud Annualized Revenue Run Rate?

“Commercial cloud annualized revenue run rate is calculated by taking revenue in the final month of the quarter multiplied by twelve for Office 365 commercial, Azure, Dynamics 365, and other cloud properties.” – Microsoft

When you think about it, this has always been an unnecessary number during recent earnings calls. Why didn’t Microsoft just report quarterly revenue numbers for their cloud computing portfolio of products and services? That’s something you’ll have to ask Microsoft CEO Satya Nadella or the company’s Board of Directors, but this is how Microsoft has been reporting its cloud computing revenue numbers that are dispersed across its financial reporting segments.

Now, back to our analysis of comparative division performance from the top two cloud players in the world of cloud computing.

Microsoft says that its commercial cloud annualized run rate exceeded $15.2 million by the end of the third quarter (January 2017 to March 2017), which means their cloud-related sales came in at $1.267 billion for the month of March. Since Microsoft’s cloud revenues have been growing sequentially for a really long time, it’s safe to assume that Microsoft’s quarterly cloud revenues would be less than $3.8 billion ($1.267 billion times three.) 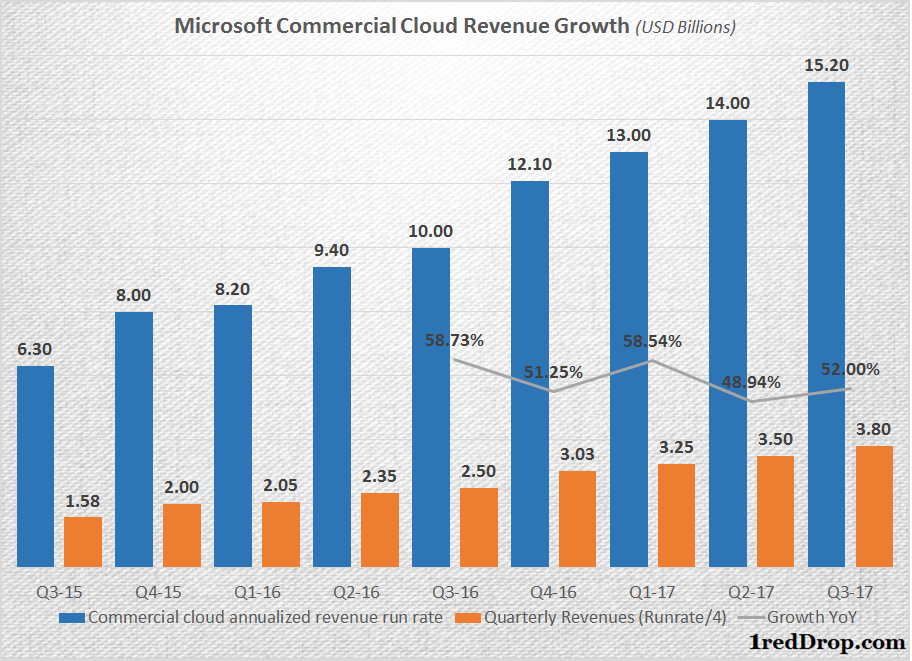 Now, Amazon and Microsoft have been running neck and neck on their cloud revenue numbers for the past couple of quarters, but during the Jan to March quarter, Amazon reported $3.661 billion from Amazon Web Services, its cloud division.

If we calculate Amazon’s annual run rate by multiplying the quarterly revenue by 4, then it is only $14.64 billion, much less than Microsoft’s $15.2 billion.

But – and this is important to remember – Microsoft uses the last month of each quarter to calculate its run rate, while Amazon uses actuals for the quarter. Even then, the chances are very good that Microsoft has already beaten Amazon in overall cloud computing revenues.

Now let’s try this from another angle:

That’s very interesting, to say the least, because, now, the odds of Microsoft nosing ahead of Amazon in cloud computing revenues become even higher.

But we already knew this was going to happen at some point. In fact, we’d like to draw your attention to what we said on February 19 – more than two months before the two companies reported their earnings for the first calendar quarter:

“Microsoft is the only company that can possibly earn more than Amazon from cloud computing, but that’s got a lot to do with their strength in SaaS, not just cloud infrastructure. Microsoft might already be the Number One horizontal cloud service provider, while Amazon is the Number one vertical player.”

What’s even more interesting is that we titled that article: Why Toppling AWS from the Top of Cloud Computing is Not an Easy Task

And the reason we made that claim at the time is very simple: Amazon is undoubtedly the number one player in the IaaS segment, while Microsoft is the leader in the SaaS segment, but with a fast-growing IaaS offering in the form of Microsoft Azure.

Until now, they’ve been running neck and neck on cloud computing revenues, but in February 2017, we expected Microsoft’s revenues to eventually get bigger than Amazon’s over time because the SaaS market is much bigger than the IaaS market, and it’s growing at a faster rate as well.

One look at these projections for installed workloads – from Cisco – will tell you that: 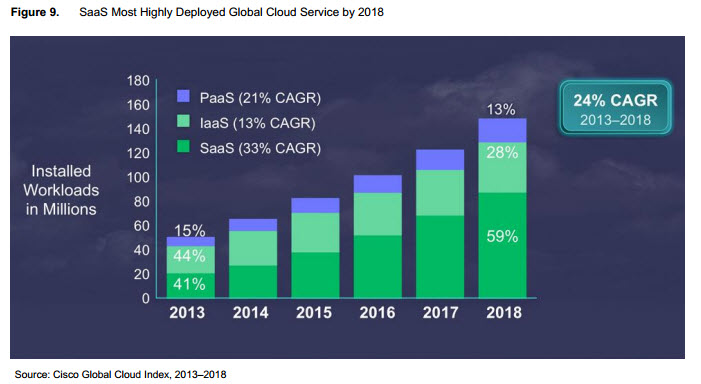 So, while Microsoft may have already taken the lead in overall cloud computing revenues, Amazon still remains the king of the Infrastructure as a Service jungle. Most of their cloud revenues come from IaaS, and that might change in future because of their focus on SaaS products, of late.

But it is undeniable that, while Amazon still holds the crown for public cloud computing infrastructure and IaaS, Microsoft is could well be the leader in cloud computing on the strength of its SaaS lineup consisting of Office 365 and Dynamics 365, the former a lot more than the latter.

As it stands, Microsoft, Amazon and IBM have already carved out their niches in cloud computing, and all of them are doing their very best to protect their cloud turfs, while trying to slowly encroach into other areas as well.

What you’re going to see over the next few weeks is a torrent of articles saying how AWS has been toppled from its high perch in cloud computing. The truth is, no one has been “toppled” by anyone else. Microsoft’s overall cloud computing revenues have possibly gone past Amazon’s thanks to none other than Office 365.

No more, no less, and never you mind the barrage of bombastic articles that will inevitably come.