Microsoft CEO Satya Nadella revealed during the recent Build conference that their lead SaaS application Office 365 has crossed 100 million monthly active users – a massive number that will allow Microsoft to keep its number one position in the enterprise collaboration and productivity market for a long time. With Office 365 hogging all the media limelight, there is very little attention paid to their other SaaS product, Dynamics 365, which is growing at much a faster pace.

When Microsoft re-organised its financial reporting segments into three divisions, Productivity and Business Processes, Intelligent Cloud and More Personal Computing, they placed all their SaaS products under the Productivity segment. This segment has huge potential, and in his 2015 shareholder letter, Microsoft CEO Satya Nadella covered, in brief, the market potential of Office 365, and the CRM and ERP markets addressed by Dynamics 365:

“Looking ahead, we’re poised for new growth given our bold ambition in this space. With Office 2016 and Office 365, we will continue to enrich the features and capabilities to help people create and communicate. As an example, many Office 365 customers will now get rich new voice capabilities with Skype for Business and other new features that have enabled us to expand our market opportunity for Office 365 by more than $50 billion. The CRM and ERP markets combined are over $60 billion, and represent a massive opportunity for reinvention as they shift to the cloud and mobile experiences.”

Nearly two years later, the Productivity and Business process segment has already become the most profitable business unit for Microsoft, and is well on its way to become the clear lead earner of its three business segments. So far, most of that growth will have come from Office 365, as commercial revenues have been growing at strong double-digit rates for almost two years running. 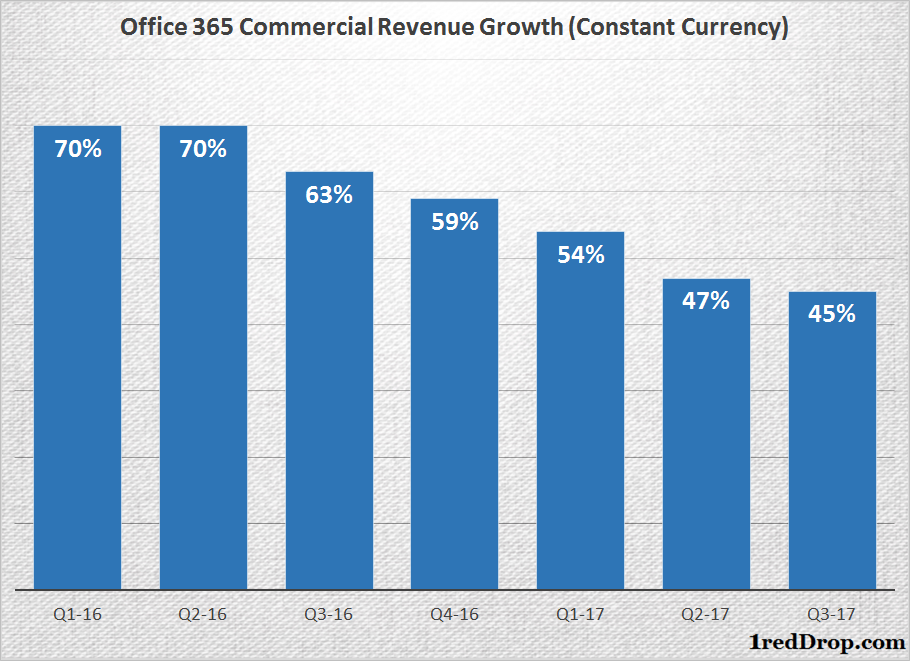 But things are slowly getting hot on the Dynamics 365 front as well, with Microsoft reporting 81% growth during the third quarter. This is the first time Microsoft released growth numbers for its ERP and CRM application, because during the first and second quarters, they only released numbers for Dynamics products and cloud services. 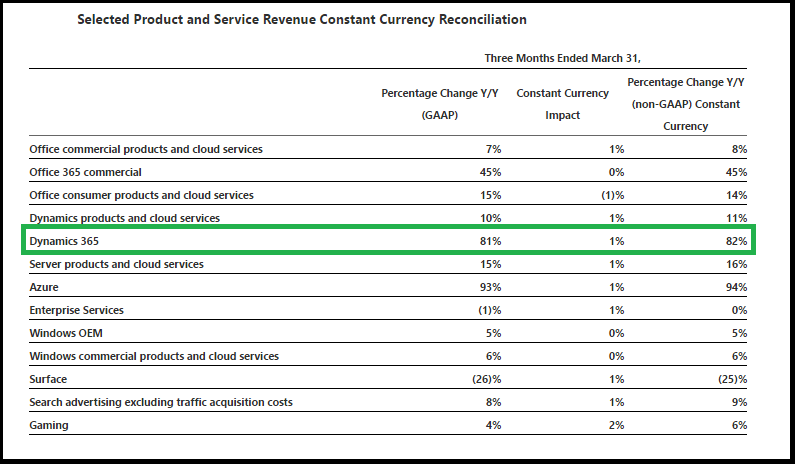 We still don’t know how big Dynamics 365 has become, exactly, but an 81% growth rate is extremely promising for the future. If Dynamics 365 gains traction, which it should because Microsoft is already making full use of LinkedIn and its resources to improve Dynamics 365’s appeal in the market, Microsoft will continue to release growth numbers for Dynamics 365 in the future as well.

The CRM and ERP markets are much bigger than the office productivity and collaboration markets, and the competition is a bit stronger as well, with Salesforce and Oracle in the fray. But if Microsoft can get this segment growing, it will be very difficult for other providers to match Microsoft’s position in the SaaS market as a whole.