Alphabet, Google’s parent company, has gone from strength to strength in the last ten years, growing its revenues from just $16.59 billion in 2007 to $99.27 billion in the last twelve months.

Alphabet’s phenomenal growth was made possible by the company’s steady march in the digital advertising world. That business grew on the strength of Google’s sheer dominance in the mobile operating system market through Android, as well as in the search engine segment, both of which keep sending traffic in droves towards Google’s web properties, which then utilizes the time users spend on their applications to show them advertisements.

But there is one trend that has been consistent in the last few years, making one wonder if Google will make lot less money/profits in the future: Google’s Traffic Acquisition Costs, or TACs. That’s the amount of money Google pays to vendors like Apple to send traffic to their applications. TACs are on the rise, while Cost Per Click (CPC) – the amount that advertisers pay for each click on their advertisement – has been on the decline.

The steady increase in volume/traffic has, so far, tilted the balance in favor of Google, because it allowed Google’s revenues to increase at double digit rates despite the company making far less per click than it used to in the past. CPC declined by 23% during the recent quarter (Q2-17), but it was completely overshadowed by the 52% increase in paid clicks, thus helping Google’s advertising revenue to increase from $19.14 billion last year to $22.67 billion this year.

There are two reasons why the current trend of higher volume and lower cost-per-click will continue in the near future. On the devices front, the growth of smartphones and the slow death of desktops is increasing traffic from mobile devices. On the regional front, there is only very little room for traffic to grow in developed markets, and most of the future traffic is going to come from emerging markets. As internet penetration in these regions goes up, Google’s potential traffic keeps expanding. Both mobile and developing nations offer higher volumes, but less in terms of advertising dollars per click.

Verdict: Volume increase and lower CPC trends will continue for the long term.

Now, let’s go back and take a a look at TACs. 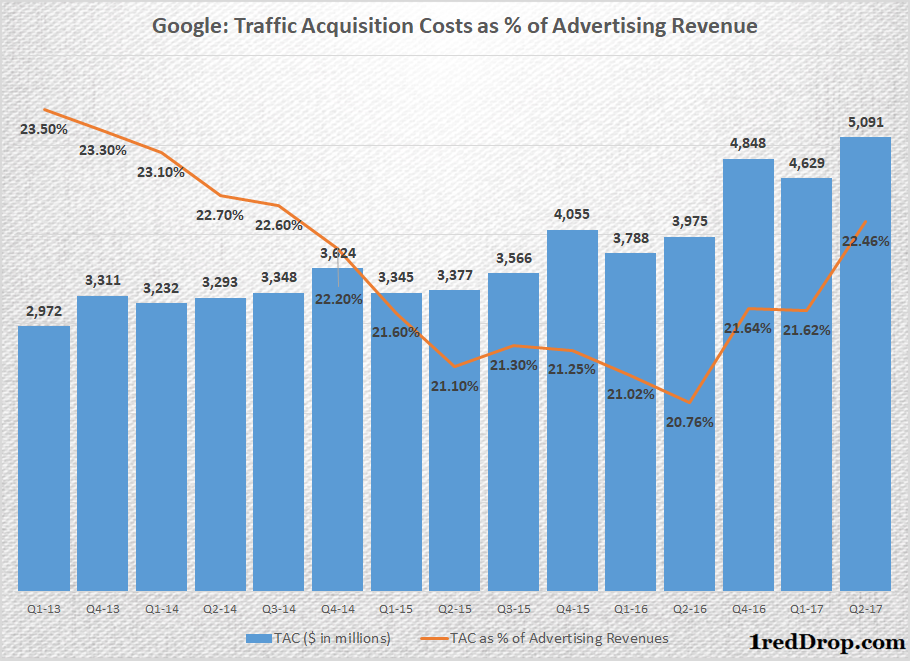 Though TACs have nearly doubled in the last few years, Google kept a tight leash on them by only spending 21% to 23% of its advertising revenue towards traffic acquisition. But a closer look at the chart will reveal that, since the second quarter of 2016, the TAC spend as a percentage of ad revenue is also on the rise. And the real question is: will it keep going north, denting Google’s profits, or will it fall as it did during the 2013 and 2014 period?

The shift towards mobile is irreversible, so the traffic from desktops will continue to decline as mobile traffic continues to improve. Google will continue to spend more to get more traffic. Take a vendor like Apple, for example: with the global mobile operating system market now under the complete control of Apple’s iOS and Google’s Android, Google will have to keep paying Apple to send traffic. Since iPhone sales are still growing, the larger the user base gets, the higher the payment from Google.

Verdict: Expect TAC to keep increasing and hit their margins a bit moving forward. It could reduce as mobile traffic grows further, but that’s only going to be because of scale.