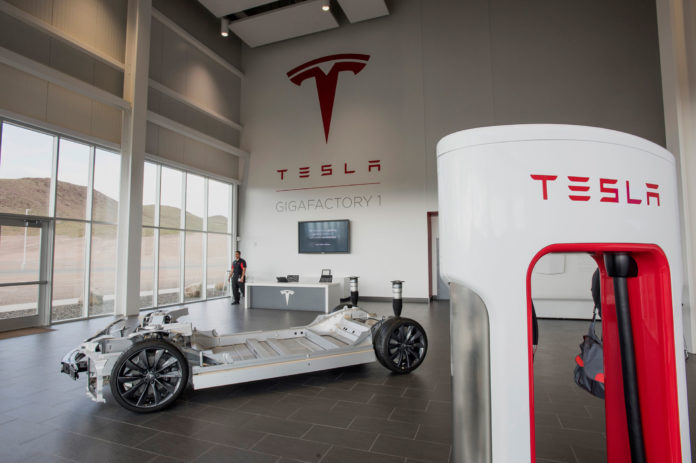 Martin Tripp, the Tesla whistleblower who filed a complaint with the SEC that Tesla was misleading investors and putting the company at risk, has surfaced yet again, this time with photos and data on Twitter that allege Tesla has been using “punctured/dented/damaged” batteries in several of its Model 3 EVs.

Tripp’s photos show a before and after photo of what he says is a Tesla Model 3 battery before being ‘reworked’ and used in a car. He backs this up with a list of VINs he says has these flawed batteries.

Tesla has confirmed that it has never used punctured cells in any way in any Model 3 vehicle, and that “all VINs that have been identified have safe batteries.”

Tripp also accused Tesla in the past of storing its scrap at a yard at its Gigafactory in Nevada, and now he has posted photos of what appear to be trailers in a parking lot. He attempts to validate this with aerial photos showing the location of the lot and the trailers, and his Twitter stream shows several trucks hauling what he claims is waste material.

While this doesn’t conclusively prove anything, if Tripp is able to prove this to the SEC, it will lend quite a bit of credibility to his ‘whistleblower’ moniker.

However, the background story to this would lead you to think that it’s merely a disgruntled worker trying to get back at his employer. Tesla is suing Tripp for creating software to hack into its manufacturing OS, but Tripp says his coding skills are that of a three-year-old.

The case is still in the courts, but Tripp has been relentless in his attempts to besmirch the Tesla name. A report less than two months ago alleged that a former employee was threatening to shoot up the Gigafactory, with Tesla announcing a security ramp-up shortly after.

This time, it seems Tripp has come out with all guns blazing, revealing photos that may or may not damage Tesla’s case.

Here’s where it stands: Tripp is openly accusing Tesla of using flawed batteries, manufacturing shortcuts and improper storage methods for waste, among other things. However, the authorities are yet to assess his evidence and call out Tesla on the matter. Tesla says it is doing nothing wrong, and that all accusations made by Tripp are false.

The question that remains is: where did these photos come from, and do they actually show what Tripp is claiming? The SEC and the courts are likely mulling over that right now.

Tripp is certainly fighting this tooth and nail. He even has a funding page on gofundme.com for the case against Tesla, and his Twitter tagline is: “I am THE Martin Tripp and I am a TSLA Whistleblower.”

Here’s what many of your M3 modules look like before and after, because they are generally reworked! Aren’t they beautiful? pic.twitter.com/QyoM0K2ozf

And to call me a hacker… I can code about as well as a 3 year old. They are just passed because I laughed at them when they were interrogating me for two days.

Hmmm.. #TSLA commented several times that all their scrap/waste is being stored in climate controlled warehouses…could this be true?! Let these pics speak for themselves: HUNDREDS of trailers at the new parking lot at GF1… pic.twitter.com/4Agz80j5Ow