Tesla Model 3 ramp has been fast and furious.

Not bad for a car that sold just 1,875 units in January this year. The rise has been spectacular, to say the least.

Tesla built an average of 4,095 Model 3s per week in the third quarter. During the last week of June and September, Tesla built 5031 and 5,300 Model 3s. With two assembly lines GA3 and GA4 already in place, Tesla has plenty of room to increase its average weekly production capacity.

According to recent media reports, Elon Musk has asked his team to target building 1,000 Model 3s per day. A weekly average of 7,000 Model 3s.

“Last quarter was great, but now we need to prove financial sustainability,” Musk wrote in a separate email to staff. Tesla needs to produce 1,000 Model 3s a day on a sustained basis in the next few weeks to achieve “a financially healthy quarter,” and then the company will keep increasing output in early 2019 as it starts shipments to Europe and Asia, he said. – Bloomberg

If Tesla gets closer to that target, the company will have a shot at building nearly 30,000 Model 3s in December. Though sustaining peak production capacity for such a long time will be easier said than done, Tesla has a huge incentive to target such level.

Can December Records be Broken?

Toyota Camry is the number one selling sedan in the United States with sales of 289,801 units in the first ten months of 2018. Toyota sold a whopping 43,331 Camrys in December last year and if they repeat that feat the Japanese carmaker will put the number one spot well beyond Model 3s reach. 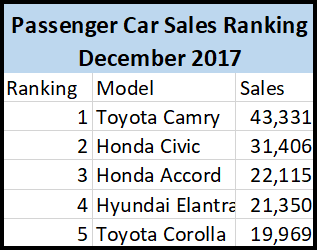 The second-placed Honda Civic recorded sales of 31,406 units, followed by Honda Accord with 22,115 units.

Even if Tesla repeats this year’s peak (September) performance, the company will be knocking the third position. But the odds are quite high for Tesla to aim big and close 2018 with a top two position.

The first phase of Tesla’s federal tax credit expires on December 31, 2018. Customers who take delivery of Model 3 after December 31 will only be eligible for a tax credit of $3,750. Tesla needs to maximize it’s delivery numbers in the fourth quarter to help its customers avail maximum federal tax credit. That’s the least the company can do for customers who have been patiently waiting.

According to noted Tesla short David Einhorn, Tesla is in for a significant revenue and earnings disappointment in the fourth quarter. His reasoning – Tesla does not have enough demand to sell cars.

This is what he wrote to investors in his recent shareholder letter. “TSLA is expected to make and deliver more than 65,000 Model 3s in December quarter. It might be able to make them, but without an order backlog, there is very little chance that there is enough demand to sell them. We expect a large revenue and earnings disappointment in Q4.”

If Tesla sells 25,000+ Model 3s in December and becomes the top-selling or second best selling car in the United States, it will be a massive statement to the world. It will send a clear message that the company now has the production capacity to match the top players in the segment.

For a company that got panned for not building enough Model 3s around this time last year, it will be a morale-boosting achievement.

Tesla would have then steered the short seller talking point from-

“How will they sell that many cars?” and “They won’t be profitable next quarter”.

It’s just a number after all:

As much as it’s hard to get there, it’s even harder to dislodge someone from that position. Windows is still the number one desktop operating system, Apple and Samsung are the top two players in the smartphone market for so many years, Android and Google Search are going to be number one for many more years. Amazon, the juggernaut is still fighting Walmart, the old hand.

Not just in the tech and retail world, even in the auto industry, winners get a gift pass to stay at the top.

BMW 3 series and Mercedes Benz C-Class have ruled the entry-level luxury sedan market all over the world for many years, S-Class has been at the top of the luxury segment for decades and if you are talking about Pickup trucks then it has to start with Ford. Toyota and Honda have held the top five positions in the US passenger car market for a very long time.

These products and cars reached the top spot because customers think that they offer the best value. Once a company or a product gains that kind of trust, it takes a very long time to fade off.

Tesla nearing the top spot is not a joke. Order backlog or not, Tesla Model 3 would have never become a top player if customers didn’t feel that there is enough value in the car.