If you’ve never heard of Surface Hub, it’s an all-in-one PC that’s essentially just a great big screen that’s also a computer. Available in 55-inch and 84-inch variants, the product will now be able to draw on information from Azure cloud and use its analytics and visualization tools to project presentations. 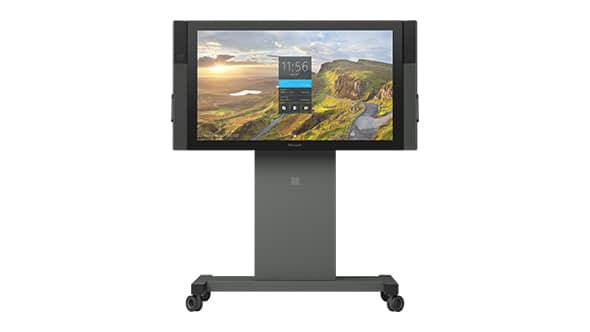 Surface Hub is essentially a collaborative tool that allows users to manipulate and present data the way they want it to. Though its usage is not widespread, Hayete Gallot, GM Microsoft Devices, says that users are still exploring ways in which they can take full advantage of Surface Hub’s capabilities.

And now, with Azure Cloud added to its list of features, the PC will be able to run applications that are hosted on the cloud. Apparently, product usage is growing in hospitals, where whiteboards are being replaced with Surface Hubs.

The use cases are still growing because the application of this in various scenarios is still not fully understood. Businesses can use it as a videoconferencing tool with their Skype for Business accounts, and also use OneNote as a digital whiteboard on which to collaborate. Supermarkets can use it to present product and buyer statistics to help shoppers with their purchases. Gallot also highlighted its use in the financial sector, where “critical decisions are made on big data insights.”

After several delays, the Surface Hub finally started shipping out about four months ago. The two variants are priced at $8,999 and $21,999, with the 84-inch screen featuring a 4K display, so these aren’t your everyday impulse buys.

It’s unclear how well the product will sell, but Microsoft has enough clout in the enterprise segment to push this out to nearly every client they have. With the Azure access, the product is even more appealing for large corporations that need to collaborate using masses of data to make key decisions.

The collaborative aspect is what Surface Hub was designed for, but it could well act as an efficient display board to disseminate important information in places where foot traffic is high. The uses are plenty, but now it’s up to users to figure out how they’ll use the product effectively without considering it an unnecessary overhead.