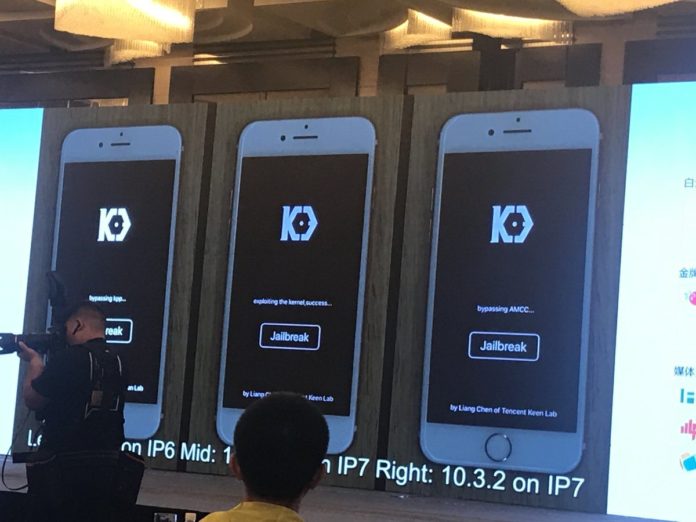 There you go! We knew something big would come out of MOSEC 2017, and Liang Chen, founder of Tencent’s Keen Security Lab has been the first out of the gate. Just a few hours ago, he demoed two jailbreaks. The first is an iOS 11 Beta 2 jailbreak, and the other an iOS 10.3.2 jailbreak. Both jailbreaks were shown working on iPhone 7.

Jailbreak is far from dead! We finally have some significant movement on the iOS 10 jailbreak scene, and the iOS 11 Beta 2 jailbreak is the icing on the cake. But before you start jumping up and down for joy, remember that these have yet to be released to the public. The iOS 10.3.2 jailbreak from Keen Security Lab may well be released to the public, but a demo is no guarantee that it will.

That said, however, there is iron-clad confirmation that jailbreaking is very much alive and kicking. Despite Apple’s recent moves to try and block every approach, mobile security experts aren’t giving up on attempting the next jailbreak.

We should be hearing more on this very soon. For now, here’s a video of the jailbreaks being demoed at MOSEC 2017 earlier today.

Stay tuned for more information on the iOS 11 Beta 2 jailbreak and the iOS 10.3.2 jailbreak from Keen Security Lab. Again, don’t expect to see these released to the public, but keep your fingers crossed just the same.

We were very confident that there would be some important news coming out of MOSEC 2017, and our hunch proved to be accurate. Now, let’s just wait and see if these jailbreaks make it as public releases. Our bet is on the iOS 10.3.2 jailbreak to be released soon, since Apple can’t patch that flaw any more.

The big question now is: what is Pangu going to do. Are they going to release their iOS 10.3.2 jailbreak, which is presumably compiled from an exploit for a different vulnerability? On the other hand, is Liang Chen also committed to Apple on the bug bounty program, in which case we won’t see any of these jailbreaks released to the public?