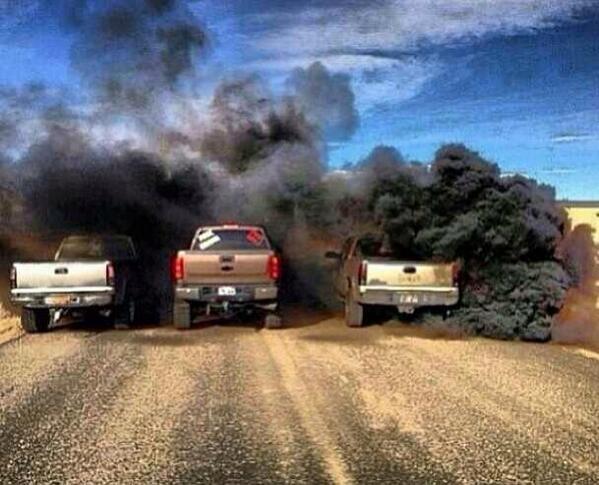 The “Birthplace of the NASCAR Stars” is how many describe the Hickory Motor Speedway in Hickory, North Carolina. But earlier this week, this sports-loving town of about 40,000 people was the scene of a trio of ‘Gas-Car’ bullies ineffectively trying to block the progress of science and technology. As news reports show, three pick-up-truck-and-SUV-driving white males deliberately tried to block a Supercharger station at a local store.

A buzz of questions surround this unfortunate incident, which is by no means an isolated one. Stories of ‘rolling coal’, or spewing out black smoke with the help of engine modifications, abound, as do instances of “ICE-ing” of Tesla Supercharger stations by parking internal combustion engine vehicles in parking spots designated for EV charging.

The question is not why this is happening. We know why. It’s a defensive mechanism triggered by impending and inevitable change. Fear of the ICE phenomenon giving way to an electric future is one of the causal factors.

The real question is, are they actually achieving their goal of deterring EV sales? I hate to have to spell it out, but H-E-C-K, N-O! They’re not affecting the sales of electric vehicles at all. As a matter of fact, any reasonable human being would immediately recognize the tactic for what it is – nothing more than a bunch of adult-sized kids reacting to and retaliating against change.

Harvard Business Review notes that loss of control, uncertainty and loss of face are among the ten most common reasons why people resist change of any kind. It doesn’t matter if it’s a company restructuring or the introduction of electric vehicles in a predominantly ICE-driven market. When change comes, those who cannot absorb it react in different ways, some of them negatively so.

So we have some sort of answer as to why Supercharger blocking and related anti-social activities occur, but there’s still one question left hanging: what can we do about it?

If you have a personal experience of being blocked from charging your EV at a public outlet, try reporting the matter to the authorities. While there are no specific laws yet about this type of situation, it seems that it would qualify as a public nuisance. The same goes if you’re a store owner and have a charging point on your premises. In such cases your side of the argument is even stronger with respect to the law.

But the best thing about ‘gas-car’ bullies is that they tend to back off in the face of public pressure. Either that, or the law. And if they want to butt heads with local law enforcement authorities, that’s their problem. In most cases, they won’t because they don’t have any legal leg to stand on.

As for whether or not this phenomenon will eventually die out, that could take a long time. EVs are still a very small percentage of overall car sales, and it will be years before that status quo changes in favor of the electric. In fact, things might get worse before they go away altogether.

In the meantime, understand your rights and exercise them, but do not engage with gas-car bullies yourself. You don’t want to stand up to gun-toting miscreants just to make a point. Let the law handle it.

That’s all fine, but until now we’ve been ignoring the elephant in the room. Two, actually – the oil industry and the traditional auto industry. It’s a well-known secret that some of these acts of retaliation are sponsored by large corporations with vested interests in oil and ICE vehicles. We’ve personally encountered it on several occasions, not to mention this very website being attacked by anti-Tesla entities.

And it’s not just anecdotal evidence or hearsay. For example, the United Auto Workers union last year spent at least $500,000 on a smear campaign targeting Tesla, Inc. They spent the money on retaining an expensive media consultancy, paid staff and even covering hotel bills. In what was believed to be a related event connected to an investigative news outlet called Reveal, a scathing article accusing Tesla of various things was posted, with “expert” opinion provided by someone with a clear anti-Tesla bent.

And who can forget the StopTesla campaign with its own stoptesla.com website and a hilarious (for us, not them) video about a poor petroleum dealer in Germany whose partner had just “confessed” by texting him that the Model 3 was released and that he was buying one. Epic!

Story after story tells of resistance to Tesla, so it’s not surprising that such animosity would take various forms – even Supercharger blocking.

And let’s not even get started about the extensive – and what Musk called “relentlessly negative” – media coverage around Tesla and the EV phenomenon. Mainstream news and social media were and continue to be plagued by a distinct anti-Tesla tilt in their reporting and commenting.

What’s really interesting is that all this escalated resistance to EVs in general, with Tesla being the most obvious target, is actually a validation of an inevitable electric future. You don’t spend millions of dollars dissing someone unless you’re afraid of them. And that’s what it all boils down to – fear.

Fear is a very powerful motivator, as we all know. President Donald Trump’s rise to the highest office in the land occurred because of the fear that his campaign began to spread about the ‘unknown’: the immigrant population, Islamic nations, the China trade deficit and so on. The average American voter doesn’t know the reality of these issues, only what the popular media tells them.

Now mix a little fake news into the bowl, add a dollop of crap against the opposition and what do you get? Trump in the White House.

Trump didn’t win because he was the best person for the job. He won because he basically scared voters into believing that he would take care of those so-called fearsome situations. The situations themselves were nothing more than abstract notions that evoked the emotion of fear in America’s voters.

Technically, Trump didn’t even win the popular vote. And yet he still sits in the Oval Office two years on, and counting.

And so it goes with Tesla and its indisputable position as the EV leader. The collective negativity against the company and its efforts is nothing more than an act of fear-mongering to achieve an objective. Unfortunately, unlike in Trump’s case, they’ll never win. The road to an electric future has already been paved, and the concrete has set. There’s no going back to a ‘gas-car’ scenario, and even the biggest Tesla detractors are well aware of this.

It’s only a matter of time before EVs get unanimous acceptance in our society, but it will happen. Have you noticed that the volume of anti-Tesla campaigns has dramatically reduced after just a few successful quarters for the Model 3? That’s validation of the fact that societal acceptance is already past the point of no return.

As Tesla moves into Europe, we’ll see similar campaigns in that market. The anti-EV camp has already lost the United States. Europe is the new battleground, but the fight won’t be as hard because the fighters on the wrong side are already battle-weary and ready to give up.

Europe is probably the last frontier for ICEs because of the number of global auto companies located there, but even the Volkswagens and Daimlers of the world have seen the light. They’ve committed billions of dollars towards electrifying their own fleets, and it’s in their best interest now to promote an EV future rather than spread fear about it.

In closing, the only thing to fear is fear itself. If we can see the truth behind the gas-car bullies and smear campaign specialists, we’ll know that there’s actually nothing to be afraid of. The average American voter knew this about Trump more than two years ago. Unfortunately, that didn’t pan out the way they expected. Will the EV phenomenon transcend the fear-mongering surrounding it? I think it already has, and the North Carolina incident is merely a remnant of that fear.

Remember, change is inevitable, but the collective consciousness of logical human beings who harbor a desire for development and progress will never be defeated by the fear that accompanies change.