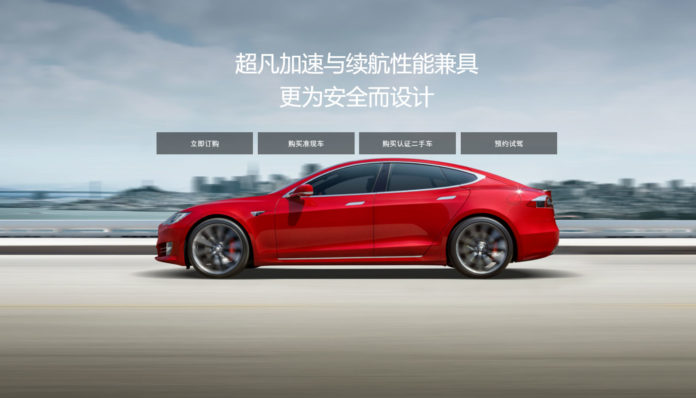 According to a recent Reuters report, Tesla registered a financial leasing company in China with a registered capital of $30 million.

The wholly owned subsidiary of Tesla will offer financial leasing services for customers and support energy and other products.

Tesla is the first foreign car company that was given the approval to set up a directly owned auto manufacturing company in China. Tesla has already started construction of its Gigafactory 3 in Shanghai’s Lingang Industrial Zone, after acquiring 864,885 square meter plot for approximately $140 million.

CEO Elon Musk expects Tesla’s first overseas plant to cost around two billion dollars and have a production capacity of 250,000 units per year.

He also made it clear that Tesla will not be building Model S and Model X in China, which leaves Model 3 as the only vehicle to roll out of Gigafactory 3 over the next few years.

One can easily assume Tesla’s decision to start a leasing company as part of the company’s plan to establish itself as a major player in China’s electric vehicle market.

The Current State of Auto Leasing in China

“Despite being the world’s largest market for auto sales, China is still in the early stage of development in terms of its auto finance industry. With a finance penetration rate of 38%, China lags significantly behind developed countries, where most have penetration rates between 50% and 80%.

In this underdeveloped auto finance environment, leasing has only started to emerge as an option for auto consumers in the past few years. In 2016, the China auto market is estimated to have generated some 600,000 leasing originations, indicating a penetration rate of 2.5%. ” – KPMG Report

Unlike developed markets, leasing accounts for only a fraction of auto sales in China.

So, why did Tesla start a leasing company?

Auto Companies do not rely on third parties to finance their sales. Banks and other financial institutions still play a major role, but every major automaker operates their own financial services arm to help increase their sales and also get some additional income.

A report by DBS group says China’s auto finance penetration rate could reach ~50% by 2020, especially for the high-end car market.

In 2016, there were only 25 auto finance companies in China and most of them were launched by foreign automakers. Auto financing penetration in China (25% to 30%), continue to lag development markets (~80%)

Tesla does not have the cushion of dealerships that can work with local financial institutions to help Chinese customers get their cars financed.

Since the number of auto finance companies is very low in China, Tesla has no choice but to start its own leasing/financing operations in the country and use it to support third-party auto financing companies to fund car buyers.

If the latter fails to get the car financed, Tesla will have its own unit to provide cover.

Though the Chinese government has temporarily dropped the tariffs, it is very difficult to predict what will happen six months down the road.

Tesla is rushing to build Gigafactory 3 in China and start production at the earliest to avoid Model 3 becoming a casualty of the US-China trade war.

Tesla is already building more than 6,000 cars a week and the company needs demand from China and Europe to help feed Tesla’s production growth.

China Auto Market is Slowing Down

After posting several years of strong growth, the Chinese auto market showed signs of cooling down as sales declined by 13.9% in November compared to last year.

Auto Sales now declined for five months in a row and the market is on track to post its first annual decline since 1990.

Tesla sold approximately 16,500 Model S and Model X in China last year in a market that’s worth more than 25 million vehicles annually. As a small player operating in the fast-growing electric vehicle segment, Tesla’s size will help the company handle a slow down better than its established competitors.

Tesla announces that the company has signed an agreement with the Shanghai government to buy 864,885 square meter plot in Shanghai’s Lingang area to build its first overseas factory. More

1reddrop reported that the local Shanghai government is the middle-man in negotiations with at least four state-owned banks to secure funding for the manufacturing unit. More

China announces the removal of a key restriction that forced auto manufacturing companies into joint ventures with local partners. More