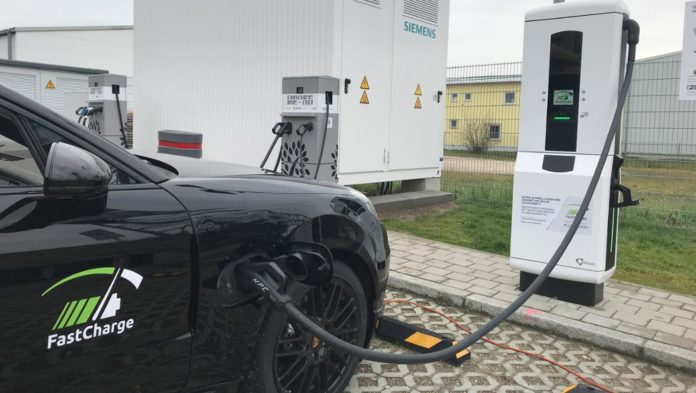 “FastCharge” a research project run by an industrial consortium that includes Porsche, BMW and Siemens announced this Thursday that a prototype Porsche Vehicle with 90 kWh battery took less than 3 minutes to charge the first 100 km range (62 miles).

The research group achieved the curiosity-evoking result by increasing the available charging capacity at the supercharging station to up to 450 kW, which according to the group is three to nine times faster than current DC-rapid charging stations.

Tesla’s supercharging stations have a maximum capacity of 145 kW and take up to 40 minutes to recharge 80%, an equivalent of 170 miles in 30 minutes.

A Tesla Model 3 Long range battery, as reported by its owner, took approximately 15 minutes to charge 201 km (125 miles). As you can see from the graph below, the first 100-mile charge came in less than 10 minutes

Increasing supercharger capacity will reduce charging time. And the evidence is a bit inconclusive to compare Tesla’s supercharging rate with FastCharge group’s record as we don’t know how many miles or km a Tesla supercharging station will provide in the first 3 minutes of charge.

“We’re definitely going to be improving our Supercharger’s technology. The thing about a 350 kW charger is that it doesn’t actually make a ton of sense, unless you got a monster battery pack or have like a crazy high C rating… We think 350 kW for a single car; you’re gonna frag the battery pack if you do that. You cannot charge a high-energy battery pack at that rate, unless it’s a very high kW battery pack. So, (for us), something along the couple of hundred, 200-250 kW, maybe.”

But the FastCharge group says the prototype vehicle that they used to achieve 100 km range in 3 minutes has an innovative cooling system to help deal with the high charging capacity of the stations.

“The Porsche research vehicle can achieve a charging capacity of 400 kW initially – a first for a passenger car. An innovative cooling system makes this possible, by ensuring even, gentle temperature control in the battery cells.”

It’s good news that automakers are investing their time and money to reduce charging time. The competition is not between two electric vehicle manufacturing companies, buts it’s between EV powered vehicles and fossil fuel based vehicles.

Looks like those days are not too far away.

Also Read: Gigafactory 1 is just one-third of its potential size

Why to Double Supercharger Capacity?